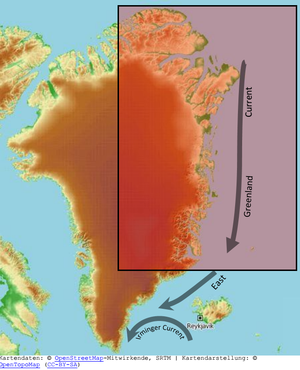 The Greenland ice sheet experienced strong environmental changes during the last decades. Compared to the earlier decades, the contribution of the Greenland ice sheet to global sea level rise doubled during the last two decades. So far, major changes have been observed in western and southeastern Greenland, namely at the large outlet glaciers. In consequence, the main mass loss from the Greenland ice sheet today is concentrated on the West and the Southeast of the ice sheet. Until recently, the northeastern part of the ice sheet did not show strong signs of increased activity. Any changes in the climatic system could, however, switch the conditions in this region of Greenland into a more unstable mode. Moreover, the Northeast-Greenland ice stream has the potential of increasing its discharge dramatically due to its marine based outlet glaciers. This is the rationale for choosing NE Greenland as study area. The present investigation of the systems state and sensitivity to external forcing at an early stage will provide important information on the future development of this crucial part of the Greenland ice sheet.

Besides an important mass loss, melt water changes the thermal structure of the ice sheet and influences the basalt boundary conditions. Interactions between the glacier tongues and the ocean water have a direct impact on the dynamics of outlet glaciers. The investigation of the feedback mechanisms between the ice sheet, its marine based outlet glaciers and the ocean circulation in dependence of atmospheric forcing is an extremely important step in understanding the variability of this complex system and its implications on a global scale.

NEQ-Ocean aims to identify and describe the temporal evolution of ocean surface currents, sea ice concentration, sea surface temperature and sea surface salinity at the North East coast of Greenland in order to provide a basis for studying the coupling mechanism between ice sheet, ocean, and sea ice. The overall project’s goal is to understand the variability of NE Greenland ice sheet dynamics and its feedback with external drivers.

Within this project a comprehensive description of the temporal evolution of the Greenland surface currents shall be derived by combining satellite altimetry data, Earth gravity field models, and ocean modelling. A time series of the ocean topography (DOT) at the North East coast of Greenland will allow identifying anomalous processes which can be cross-correlated with contemporaneous time series of sea ice concentration (SIC), sea surface temperature (SST) and salinity (SSS)