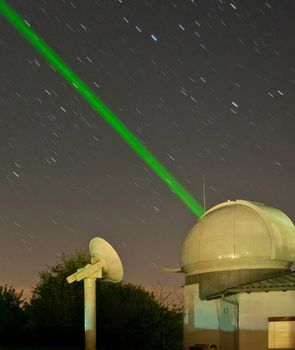 Consistent and accurate global terrestrial reference frames (TRFs, i.e., the realization of coordinate systems attached to the Earth) are a fundamental prerequisite for navigation, positioning, and for Earth system science by referencing smallest changes of our planet in space and time. As Earth system research is increasingly relying on satellite-based Earth observation data, also the precise orientation of the Earth with respect to inertial space is required to relate the satellite observations to coordinates in the Earth reference frame.

Satellite Laser Ranging (SLR) is among the most important space geodetic techniques contributing to the determination of TRFs. SLR relies on the two-way travel time of laser pulses from stations on the Earth’s surface to satellites equipped with retro-reflectors. The SLR measurement principle allows for the realization of origin (Earth’s center of mass) and scale of global networks with very high accuracy. One of the major factors limiting the present accuracy of SLR-derived TRFs and Earth orientation parameters (EOP), however, is the currently unbalanced global SLR station distribution with a lack of stations particularly in the southern hemisphere.

The benefit of the potential future development of the SLR network for the accuracy of TRF (including origin and scale) and EOP has been investigated in the study Future global SLR network evolution and its impact on the terrestrial reference frame (Journal of Geodesy, 2017, DOI: 10.1007/s00190-017-1083-1). It compares a simulated SLR network including potential future stations to improve the network geometry with the current network. The study highlights that an improved SLR network geometry means a cornerstone to meet the ambitious accuracy requirements for reference frames defined by IAG’s Global Geodetic Observing System (GGOS).